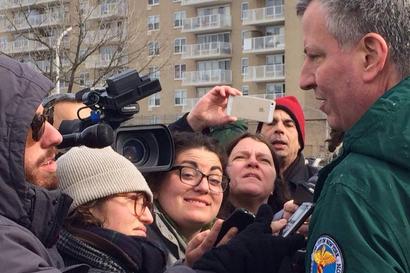 She previously covered neighborhoods in Queens for the late DNAinfo New York, breaking news locally and throughout New York City.  She joined DNAinfo.com from WNBC/Channel 4, where she was the station's first social media editor and also worked as a web ​editor at NBCNewYork.com.

While at NBC 4, Katie was part of breaking news teams that won a regional Emmy award for coverage of the Empire State Building shooting, and regional and national Emmy awards for its Hurricane Sandy coverage. They also won an Edward R. Murrow award for coverage of the 2012 storm.
​Before journalism she worked in film and television production, holding nearly every job with the word "assistant" in the title. Her first job out of college was at the "Late Show with David Letterman," and she worked on movie and TV sets throughout the city.
She has a B.S. in film and television production from St. John's University, and a master's degree from the Craig Newmark Graduate School of Journalism at CUNY.​

​​​​​​Katie Honan is an award-winning reporter who has covered New York City for the THE CITY since August 2021.

Before joining THE CITY, she spent three years covering City Hall for The Wall Street Journal, where she reported on some of the biggest national stories, including the search for Amazon's newest HQ2 campus that brought it briefly to Long Island City, Queens. She and her colleagues won a Loeb Award, the top business journalism award, for breaking news coverage of the tech giant's decision to pull out of its New York City location. In 2020, she was part of a team that was honored by The Newswomen's Club of New York with the Front Page Nellie Bly Award for reporting on the Coronavirus in New York City.